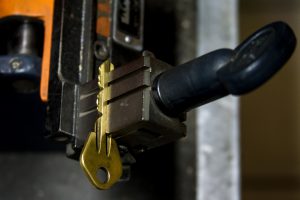 Locksmiths encounter some interesting situations in their line of work. In one instance, a locksmith received a lock cylinder from a car door taken off the car because the owner lost the keys.

Locksmiths get frantic calls in the hot summer to unlock car doors when preoccupied mothers or fathers accidentally lock their keys in the car with their infants or toddlers. They get calls in the winter when parents lock their keys in the cold vehicles or the left running vehicles. Unfortunately, these stories don’t always end on a positive note.

A locksmith of the year 1977 had to remove a wad of mud left by a colony of wasps in a lock on the door of the University mausoleum. The mausoleum is a historical monument of artistic beauty. The tomb was built in 1888 and is the home of Egyptian sphinxes of granite, bronze outer gate, polished granite doors, Italian marble walls, ceilings and floor, and three sarcophagi of marble cut. A casket is a coffin of sorts, like Egypt’s mummies, before being taken to their tombs.

Some locksmiths who unlock car doors or the doors to homes require the person they are assisting in providing proof of legal entry to show that they have a legal right to enter. The professional must protect himself/herself from being prosecuted for aiding access to the wrong person.

Locksmiths have had to come to the rescue of people recovering from a night of too much alcohol consumption. The people get drunk and lose their keys or lock the keys in the vehicle.

The profession exposes the locksmith to people who are many times in a frantic mood because of a missed appointment, who may be late for work, who have an emergency to get to, who must catch a plane or a bus, and people who have locked their keys inside the car while it’s still running.

There are most likely plenty of stories that someone in this profession would be embarrassed to tell. Many stories have been forgotten over the years. Many stories would be too sad to say. But the gratification the locksmith gets from the customers who truly appreciate the help and show it is sure to be worth the effort. No job is perfect, and there are probably as many drawbacks as there are happy memories. But as with any other job, there will be good days and bad days and plenty to relate to the children and grandchildren.